What is AndroidX And Easy Migration Process

Hello, Android geeks. You must be curious to know aboutwhat is AndoroidX?or just finding answers here and there about what benefits AndoridX provides and how to migrate your current project to AndoridX? Don’t worry here we have tried to answer all your questions regarding this most important topic by gathering information from different reliable platforms available to you.

Basically, AndroidX is a replacement for the Android support library.

Shipped with your APK

Named v7 but the minimum sdk supported is 14 but the most important is that the new package structure encourages small and more focused libraries that are separately maintained with their own semantic version.

Why migrate to AndroidX?

The support library’s final version is 28.0.0, and it is no longer maintained. So, if we want bug patches or new functionality that would previously have been added to the Support Library, we must upgrade to AndroidX. The AndroidX namespace will be used for all new Jetpack libraries.

The Jetpack Navigation Component is required if you want to use Google’s suggested Single-Activity Architecture app strategy.

The MVVM pattern is used with Repos and Arch Components. They are unavoidable when developing large-scale programs under the modular arch to segregate via modules to make the code base maintainable, scalable, and to get better CC. Writing examinations has never been easier.

AndroidX provides standardized and independent versioning, as well as improved name standards and more frequent releases. Other libraries, such as Google Play services, Firebase, Butterknife, Databinding Mockito, and SQL Delight, have transitioned to use the AndroidX namespace libraries.

How to migrate to AndroidX?

Android support libraries’ last version was 28. All the new feature development will be in AndroidX project. So, immigration is necessary luckily there are easy steps to do so.

If you create a new project you don’t need to do anything, the android studio will prepare everything for you just leave the check box use legacy android support libraries unselected. Android studio will also help us when we want to migrate an exciting project.

So You have already known the basics of what is android x? and the benefits of AndroidX. But if you have been using the old version then you must be thinking about how to migrate current project to AndroidX?

But before you migrate we recommend you to take backup.

Do the following changes in an existing project 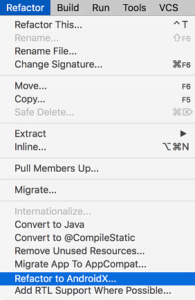 Put these flags in your gradle.properties

Tags: andoridx jetpack, AndoroidX, androidx libraries, benefits of androidx, how to migrate to androidx, what is androidX

How E-signature Is Changing The Way We Do Business

All the Things You Need to Know About Wallet Keys

DailyUpdates Article - We are keen to provide our users best experience to read about a different niches like technology, marketing, business, lifestyle.

We mainly focus on quality code and elegant design with incredible support. Our WordPress themes and plugins empower you to create an elegant, professional and easy to maintain website in no time at all.
https://afthemes.com/

You may have missed

5 Food Products to use in your New Year’s Party

6 Tips to have a safe and hassle-free journey